DFC on the High Street!

Attention citizens! The very yummy DFC - as mentioned just about every time I update this blog - will be available in your local Tesco for ONE WEEK ONLY, between 26th November and 2nd December, for the bargain price of only £1.99! If you've been curious about the DFC for a while, but been shy of committing to a subscription, this is an unmissable opportunity to see what all the fuss is about. It's only in Tesco, mind you - no other shop. But that's over 600 branches to choose from, so it shouldn't be too much of a challenge to find one. This issue's got six pages of the Mighty M in it, as well! SIX, I TELLS YA!! Buy it or be a big stupid-head! Thank you. 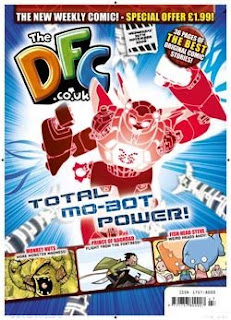 (PS. This is the Tesco special cover to look out for, which is different from the subscriber edition. The insides are the same, though).
Posted by LauraH at 2:42 PM No comments:

Return of the M

Looks like it's time for another piece of news. The Mighty M (see a couple of entries down) is starting its re-run in the DFC as of issue 26 (dated November 21st.) The strip was apparently well-received when it appeared in the Guardian Comic earlier in the year, and you can expect to see the band in more kooky adventures in the future. Woot! But, for the moment, I'm pointing your eyes in the direction of the past, to take a look at the characters in an embryonic stage (kinda). 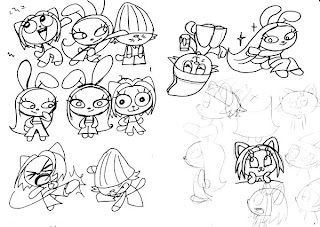 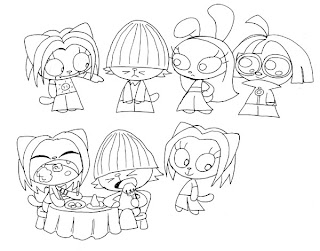 Gosh! Well, according to my file data I scanned these images about two years ago, and they were at least two or three years old at that point, so let's say the band have existed in some form for a good five years now. At this stage in their development, the Powerpuff Girls influence was much more obvious (others have crept in over time, such as HiHi Puffy AmiYumi and Um Jammer Lammy), but the three basic characters are very similar to their present day incarnations.* As far as names go, Mandy was always called Mandy, but Moz was called Roofus and poor old Mimi didn't have a name at all - nor did the band itself! As you could probably guess, those little problems resolved themselves pretty quickly when I made the decision to give them all names beginning with "M". Let's fast-forward to May (another M - must be an omen) this year, and one of the sketches I sent to the DFC when I pitched the series: 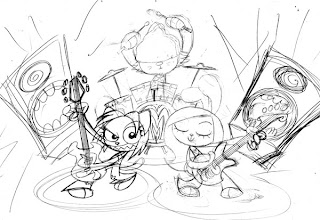 The whole not-having-drawn-them-for-about-four-years thing meant there were no in-between stages - this is pretty much immediately how they came out this time round, based on my memories of the earlier pics but with a lot of new drawing experience crammed into those intervening years. Of course, I had to decide on a colour scheme for them at this point too (not to mention an actual story - and let's not mention that, as it was a pretty torturous process!), which also fell into place pretty easily. Mandy's theme colour is red, for energy; Mimi's is pink, for gentleness/cuteness; and Moz's is green, for calm. And there's a tip for you, kiddies - when you're designing a gang of characters, give them each a theme colour that reflects their personality in some way. There's a generally accepted list of the psychological connotations of all the colours, which you can Google if you're not sure.

So, yeah. Here's the end result of those scribblings from 2003ish: the band as they appear in The DFC. 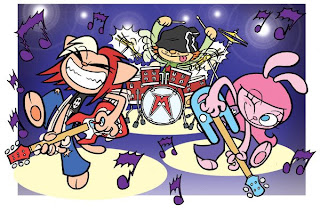 I say end result, although actually the characters will continue to evolve and change a bit as I draw them more - this inevitably happens over time, as you get more used to the forms. So, check back in another five years' time and we'll see what shape they're in then! In the meantime, if you haven't got a DFC subscription yet, might I tactfully suggest you get one before issue 26? (I've done the cover of issue 27, too... but I can't give anything away about that one ;)

*I have no idea about that dude/girl with the jacket and glasses. Quite a nice character design, though - I might try and work him/her into a future story...

***EDIT!*** I just realised, I've inadvertantly lied to you all! When I first created laurahowell.co.uk in 2006, I did the proto-Mandy image below as a temporary frontpage image. This is a true Missing Link in the development of the Mighty M!

Posted by LauraH at 6:15 PM No comments: