If you've been keeping an eye on the UK comics scene this year, you might be aware of this daring project. I'll let the publisher, Blank Slate, explain it in the words of their official press release:

Nelson is a 250-page collaboration between 54 of the UK’s most exciting comic creators. It is an unprecedented experiment to create one complete story – a collective graphic novel.

London, 1968. A daughter is born to Jim and Rita Baker. Her name is Nel. This is her story, told in yearly snapshots. Each chapter records the events of a single day, weaving one continuous ribbon of pictures and text that takes us on a 43- year journey from Nel Baker’s birth to 2011.

Based on an original idea by Rob Davis and co-edited by Davis and Woodrow Phoenix, Nelson celebrates the incredible diversity of talent in British comics today. Creators known for their editorial and national newspaper strips unite with those from humour comics such as the Beano, The Dandy, and MAD Magazine joining a wealth of talent from children’s books, indie publishing and webcomics, with the science fiction and superhero worlds of 2000AD, Marvel, DC, and Dark Horse.

Part exquisite corpse and part relay race, Nelson spans decades of British history and a myriad of stylistic approaches in telling the story of one woman’s life by 54 creators, in 54 episodes, detailing 54 days. The result is a surprising and compellingly readable book that is sad, funny, moving, poignant, ridiculous, heartfelt, and real. This is a story like none you have seen before.

I was delighted to be asked if I wanted to be on board earlier this year and now, several months after completing my five pages, the whole thing is about to hit the bookshelves. The standard of art and writing in this book is frankly off the scale, which made contributing to it quite an intimidating experience in the end - but, I'm honoured to be sharing page space with some of my very favourite UK comics creators. Here's a teeny tiny peek-ette of my bit, which comes near the end of the book and wraps up the threads of a few established characters' lives... 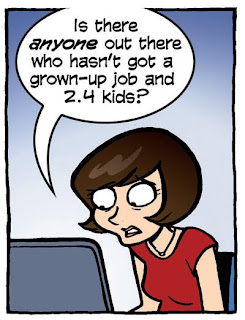 There's more about Nelson on the ever-reliable Forbidden Planet blog here. I won't be attending the grand launch at the Thought Bubble festival, but I'll hopefully be at the Gosh! comics signing event on Friday November 25th. Come along, buy the book - it's going to be amazing.
Posted by LauraH at 11:44 PM No comments: