Huzzah, it seems that volume 2 of Jamie Smart's now-officially-a-series-because-there's-more-than-one-volume FAT CHUNK is finding its way into comic shops. This is doubly exciting news for me, firstly because I have a couple of pages in it and secondly because it features several of my favourite arteests of the moment, including the man Smart himself and the Comics Deity that is Aaron Alexovich. Can I get a Yay, and then another one? Cover image attached, to help you deal with the dude in your local comics shop when he says "Never heard of it" and goes back to dusting the display of Simpsons clocks. My advice would be to print it out, fold it into a paper fan and smack him over the head with it manzai-stylee, but that's just me... 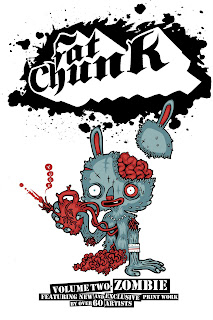 Following on from the previous post, it seems that Zombie Nation didn't quite rise to the occasion in the Toxic poll stakes and therefore won't be appearing in the mag regularly - but, that's what you get for relying on the living dead. Tsk. However, on a more positive note, I'm going to have a piece of work appearing on t'telly next week, so watch out for that. It's a Dennis and Gnasher/Blue Peter crossover and it'll be appearing on said show on Tuesday afternoon (and on the trusty iPlayer thereafter, for those of you not in the house when Blue Peter's on). It's my first ever attempt at drawing a celebrity-based story for the Beano, so I hope it looks OK on screen (although frankly, only people with HD TVs will really know if it doesn't ;))
Posted by LauraH at 5:09 PM 5 comments:

Email ThisBlogThis!Share to TwitterShare to FacebookShare to Pinterest
Labels: Beano

Attention zombie lovers! A double dose of undead doings has been drawn by me for your viewing pleasure. Number one is "Zombie Nation", a two page story currently nestling in the pages of Toxic comic's free Crazy Comics supplement. If it gets enough votes, it will become a regular strip in Toxic! Whoa! So, finish reading this, then toddle out to the shops, buy Toxic, read Crazy Comics and go to www.toxicmag.co.uk to vote. Or, if you're feeling lazy, just take my word that it's chock-full of ZOMBALICIOUS GOODNESS and go vote for it anyway. Yes. 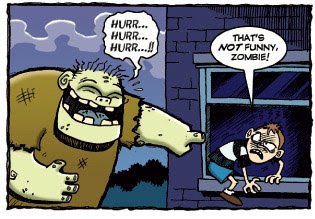 And as for zombie action part two: in a masterstroke of convergence, Zombie Nation is not only up against Jamie Smart's fine strip "Count Von Poo" in the Toxic supplement, but I have also just completed another two-page zombie comic for Jamie's own upcoming "Fat Chunk 2" anthology. What are the odds?? No voting involved this time, just go out and buy FC2 when it hits the shops in July. 'Cos you've been waiting your whole life to see an adaptation of "Three Little Maids From School" with zombies, I know you have. 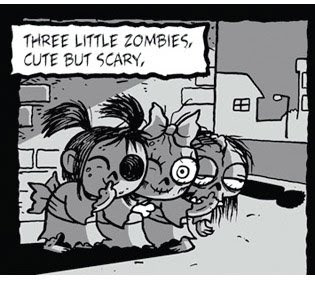 A triple whammy of AUUUGHH

Well, that's it - today is now officially Black Friday in the Comics bit of my brain (i.e., all of it). First off, as you probably already know, the final DFC hit the nation's collective doormats this morning. A lovely issue in itself, but heavy with gloom at the thought of there being no more. Having said that, there's so much energy in Team DFC that I'm sure there's lots of good stuff to come in the future from the space the comic occupied. However, trying to stay cheerful is a bit tough, when...

Shortly after said doormat-dropping event, I got an email from that fine fellow ILYA, editor of the Best New Manga books that my Gilbert & Sullivan strips have appeared in. Apparently the publishers are putting the BNM series on hiatus, so there will be no volume 4 in 2009, and maybe not ever again. Another outlet for my (and many other people's) work gone.

And if that wasn't bad enough, the rancid icing on this mouldy cake of a day came about an hour ago when I got an email from the editor of MAD magazine - the very gentleman who showed me round the MAD office when I visited New York in 2007, who accepted a submission from me a few months later, and who will always have my gratitude for both of those things - saying that as a result of cutbacks, MAD is now moving from monthly to quarterly and today is his last day as editor.

Have to say, I'm glad I quit the day job and took the leap into Following The Comics Dream when I did, because I'm pretty certain I wouldn't have the guts to do it right now :(
Posted by LauraH at 8:29 PM 4 comments: 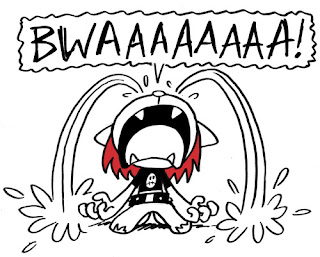 In case you don't already know...

"The DFC, a weekly comic (launched May 2008) for boys and girls is up for sale, following a decision by The Random House Group to cease publication.

Philippa Dickinson, MD RHCB, said: “We are very proud of the DFC and the reaction it received from families, schools and especially the children who have enjoyed reading it. It is an innovative concept which we have been very happy to back. There can be no successes without taking risks, after all. Unfortunately, in the current economic climate, we have decided that the DFC is not commercially viable within our organisation.

“David Fickling, the staff at the DFC, and all the comic’s contributors have worked tirelessly to produce what is an amazing weekly publication and we would be delighted if a buyer could be found who would like to take the DFC on as a going concern”

If no buyer is found, the title will close on March 27th."

I've been meaning to blog about this since the news broke yesterday (although technically we creators were given a heads-up a few days ago... not that it really helped it sink in).

So that's that. Despite the best efforts of all concerned the DFC will be bowing out with issue 43, wrestled into submission by the Economy From Hell. Reactions so far seem overwhelmingly positive and sympathetic, with even the most cynical of commentators commending this admittedly flawed but incredibly noble venture. And that's what we have to hold on to, really - like the demise of DC's MINX line last year after a huge fanfare the year before, speculating on what went wrong may offer some insights to any publisher thinking of picking up where David Fickling left off, but it won't allow anyone to hop back in time and do things differently. For the moment I'll be holding on to the things that went right - the wealth of amazing new comic material it launched into the world, the opportunities and alliances it offered to so many creators, and just the sheer bloody BALLS it took to do what it did. Truly a Dream Followed Courageously.
Posted by LauraH at 11:03 PM 1 comment:

Email ThisBlogThis!Share to TwitterShare to FacebookShare to Pinterest
Labels: DFC

That's right folks, they said it couldn't be done (more specifically, I said "I'm never bloody well doing that again"), but February 1st sees the start of my second not-quite-annual STRIP-A-DAY SPECTACULAR! I'll be drawing and uploading a brand new comic to my website and a related Facebook group - with no thought for my own personal safety - every single day for 28 solid days. Then swearing never to do it again, probably. So make a date for www.laurahowell.co.uk on Sunday February 1st!
Posted by LauraH at 8:41 PM 2 comments: