Hi all, just a quick note to mention I'll be selling my wares and drawing piccies at the Manga-tastic MCM Expo in London this weekend (May 26th/27th), and I'll also be a guest at the 2D Festival in Derry the weekend after. 2D is a fantastic event and I urge you to come along if you're in the area (or even if you're not - Northern Ireland's lovely at this time of year;)

See you there!
Posted by LauraH at 5:29 PM No comments:

...and you're eagerly tearing the wrapping paper off a flat, rectangular object. What could it be? Nope, not a squashed box of Dairy Milk - it's this year's Beano annual! Or maybe the Dandy annual, if that's how your parents roll! WOOO! The excitement of a new Beano or Dandy annual never really diminishes with time, and that's certainly the case for us overgrown children who play a part in filling them. For the second year running I've contributed to both publications, reprising last year's Bully Beef and Chips with three new stories, as well as adding three more pages of another very familiar character... 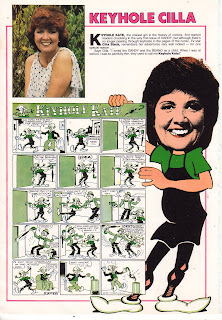 Noooo, not Our Cilla - it's Keyhole Kate, everyone's favourite peeping lunatic. Did you know she's been around since the comic's start in 1938? This must be at least her fifth or sixth incarnation, I think. Gawrsh! I'm amazed they managed to come up with so many keyhole-looking-through scenarios over the years. 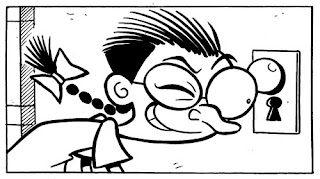 The Dandy annual looks to be a real nostalgia-fest this year, probably to tie in with the comic's 75th anniversary in 2013. Check out the blog of the lovely Wilbur Dawbarn (link on the right) for more sneak prviews.

Over in Beanotown, I've been drawing a whole load of Meebo & Zuky, including a slightly new spin on the characters which I'll be blogging more about in the next few weeks... 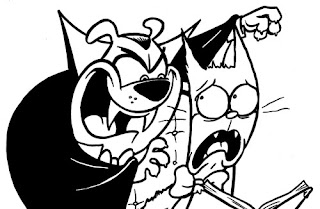 And - very excitingly for me - I was asked to produce some new pages for a classic strip that's currently re-running in the weekly Beano. I'll let my teaser image do the rest of the talking;) 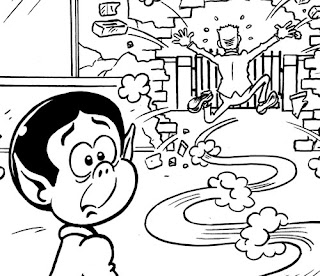 It's a fantastic experience to work on characters devised by such greats as Allan Morley and John Geering, and I can honstly say I'm dead chuffed about it. I hope my pages raise the appropriate chuckles.

So there we have it, make sure Santa brings you a copy of each one (or just treat yourself when they come out in July, eh?)
Posted by LauraH at 9:52 PM 11 comments: